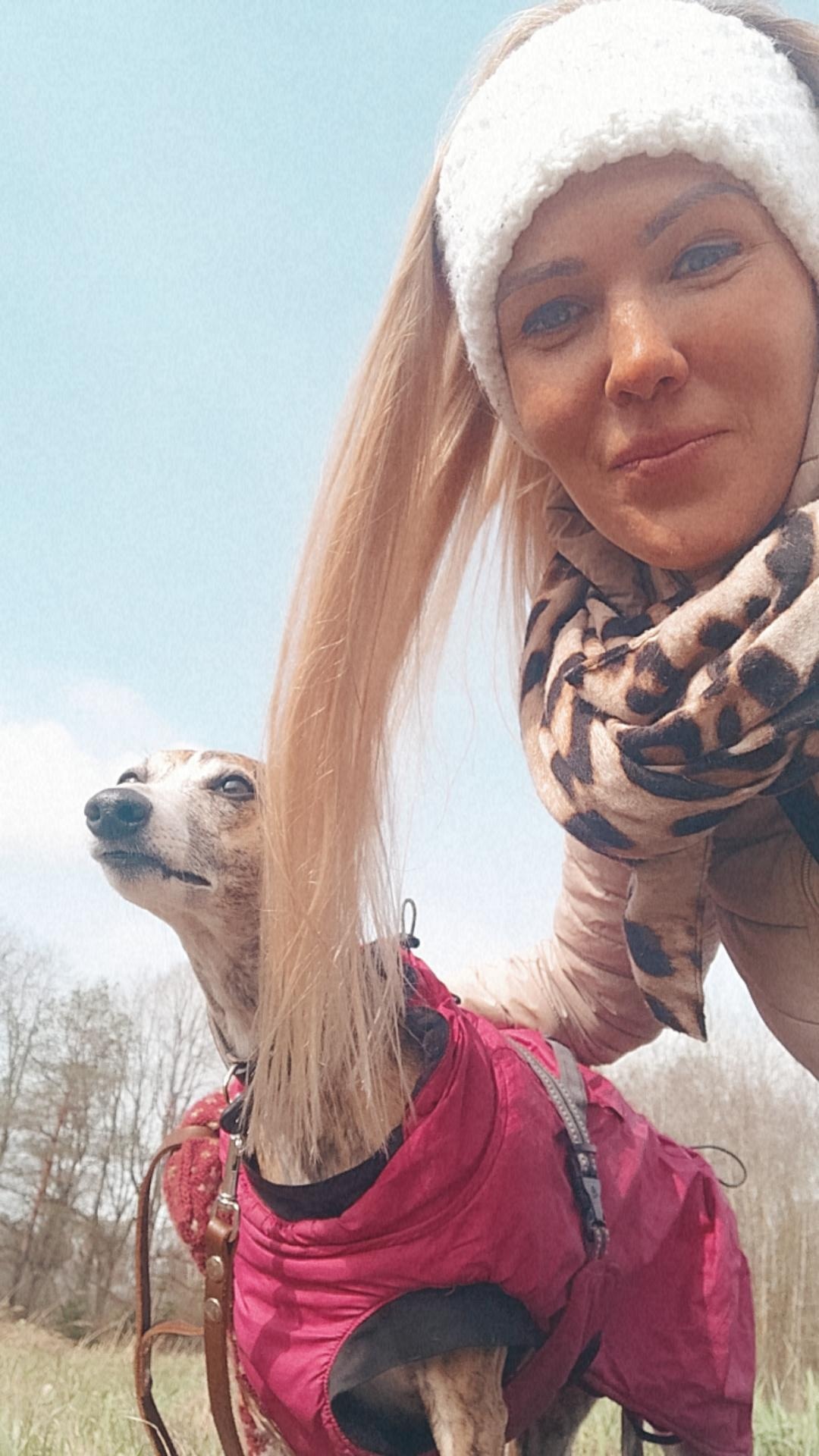 Hi reader! Believe it or not, Vētra also known as Ruffa, had never tried Lure Coursing, which is so popular within sighthounds.

When Vētra was still a puppy, we watched one training. She was too young to participate herself. Depending on the breed of dog, a certain age must be reached to start training. The dog’s skeleton must grow to reduce the risk of injury to the growing organism.

The purchase of cursing accessories for the e-shop again aroused my interest in cursing. And a decision was made – let’s try this season! Vētra is now 3 years old, and we can hardly hope for high achievements, but the main thing is to participate if the dog enjoys it. Right?

About 2 weeks before the first training of this season in the Facebook group “Lure Coursing in Latvia (FCI / LKF)” the training date was announced. It will be Saturday, April 24. I kept this information in mind for a long time, because our family holiday plans can change at the last minute. I opened information on Facebook – registration open until Thursday, April 22. On Wednesday, I asked some more clarifying questions to the coursing training organizer Egijs and sent the application. Yay, we will participate in training! We received a registration confirmation on the same day.

On Friday, we received an e-mail with the exact location of the training, instructions on how to behave during and before the training, including epidemiological instructions. We also received a list of participants by groups, where each group has a certain number of dogs and times. Vētra was placed in group 4, and the time allotted to our group was at 15:30-17:00.

We get acquainted with the training rules – they also mention that it is necessary to check the length of the nails so that they are not injured during the race. Conclusion for us, as usual, when we check the length of the nails for Vētra – we have to cut them! When I started to cut, I noticed that the forefinger was a bit injured. This serves as a good accompanying source of anxiety before the first workout, haha. I’m glad it wasn’t one of the 4 main nails and I thought that, if anything, we can definitely do something before the training.

We arrived exactly on time. Or even a minute late. We still saw many basenjis, which means that the previous group was still running. We went to the organiser’s tent to register, pay the participation fee, as well as sign for compliance with the rules. It’s nice that they were already included in the training information, and it was possible to get acquainted with them in advance.

We understood that we will have to wait. I put on a sweater on for Vētra and went for a walk. Weather was a mix between autumn and spring. We walked until we have managed to freeze and went to warm up in the car. I think I was very lucky that in the first run Vētra was put in the group after the basenjis – so we knew very clearly when the previous group ended and ours started.

Time had passed and the first round of our group’s race had arrived! A flock of whippets gathered at the starting point. Vētra did not “communicate” with other dogs too much, but it was no wonder since she is the main representative of animals at home and communicates mostly only with her people.

While the first whippets were running their first runs, I lifted Vētra in my hands to see from above what is happening on the track. Seeing the spectacle, Vētra began to manifest herself vocally – between whining, howling and barking. Yes, coursing is really “in the blood” for sighthounds!

It was our turn. I removed sweater and collar from Vētra, and held her so that she didn’t start prematurely. For the first time, Vētra was running alone, not in pairs with a running partner. The training organiser moved the mechanical lure a bit to create interest. The hare started to be pulled and START is given! At first, Vētra did not run – I had to run with her for more than ten meters. Then the hare was pulled faster – and then Vētra chased after it herself and successfully ran the whole distance. Great! 🙂

We learnt that there are usually two runs in training, between which a half-hour interval is desirable. We went for a short walk to calm down the heartbeat of Vētra after the race, and then rested a little in the car before the next race.

We arrive in the area before the start. An owner of another whippet offered to run our dogs along the track together. Since Vētra was not very experienced, I doubted if it was a good idea, but I agreed. Hoping that Vētra would take as an example what the other dog was doing and started the run better.

The start was given and both whippets went off on the track. The second whippet took the lead. As the track is quite large, I did not see part of it from the starting point. After a while at the finish I sew a hare, the other whippet, but Vētra wasn’t there! I called and asked the lure operator what had happened. It turns out, in the middle of the track, when Vētra realised that she could not keep up with the other dog, she simply threw in the towel. 🙂 🙂 Smarty pants. Victory or nothing! 🙂

1. For sighthounds cursing is really “in the blood”!
2. Better results can probably be achieved by bringing your dog to training at an earlier age,
3. However also when introducing an adult dog to this dog sport, the dog quickly understands the idea of what needs to be done.

If your dog / dogs were taken to coursing training, what was their first training experience? Or maybe you are just considering starting Lure Coursing training?

I will be happy if you share in the comments! Have a great day for you and your 🐾! 🙂

PS Here you can find useful supplies for training 🙂

You've just added this product to the cart: